Getting Rid of Our Clothes: The Laundry Experiment Complete


So, here it is! The follow-up post to this one about our lack of clothing around here... 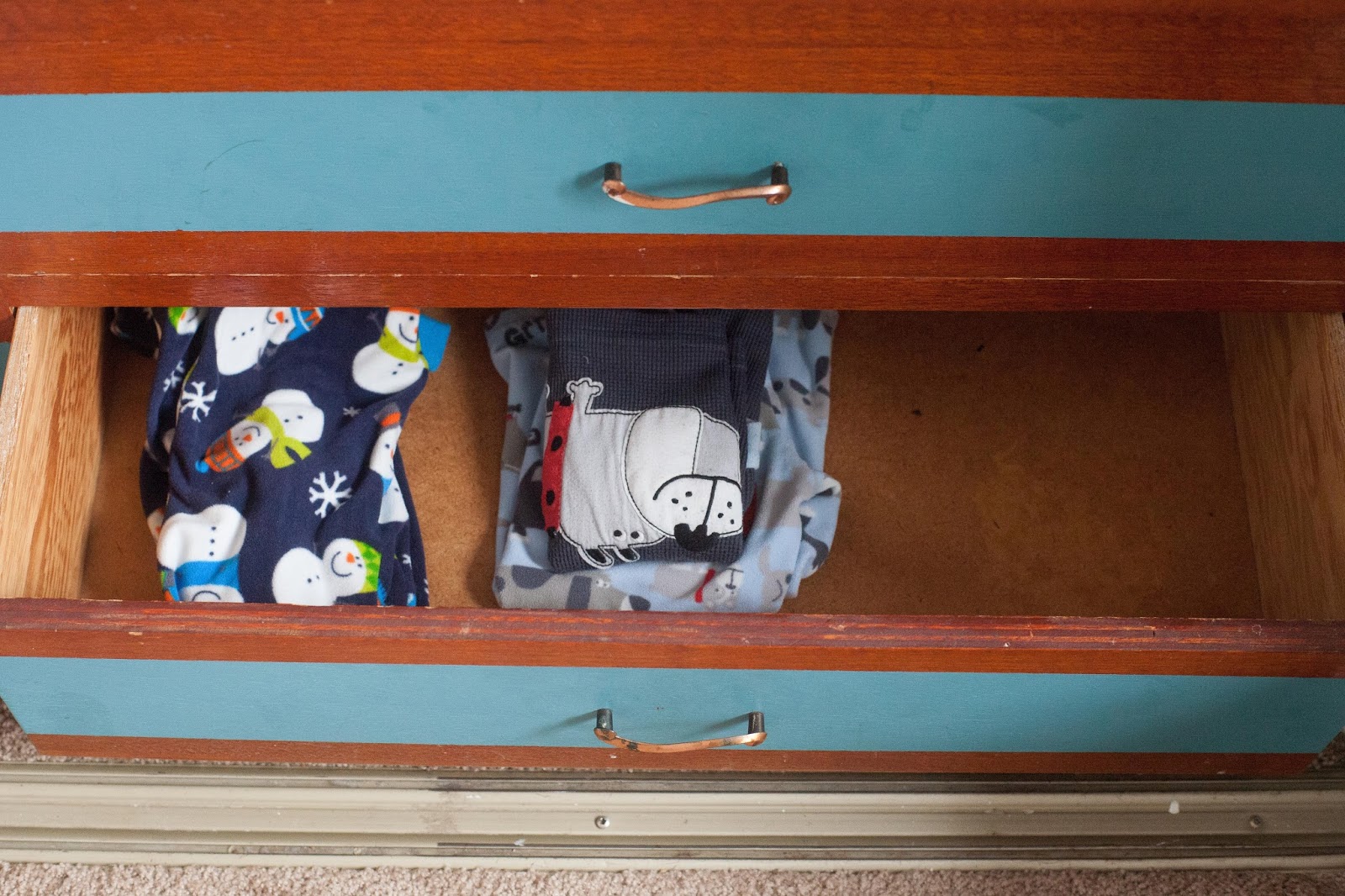 To recap: about a month ago, I packed up the majority of my kids' clothes. I left them with (what I felt was) the basics, the minimum amount to keep them clothed for a few days. The idea was to practice living with less, and to assess the impact (hopefully positive!) it had on my laundry-induced insanity. Laundry is the worst. Ugh. 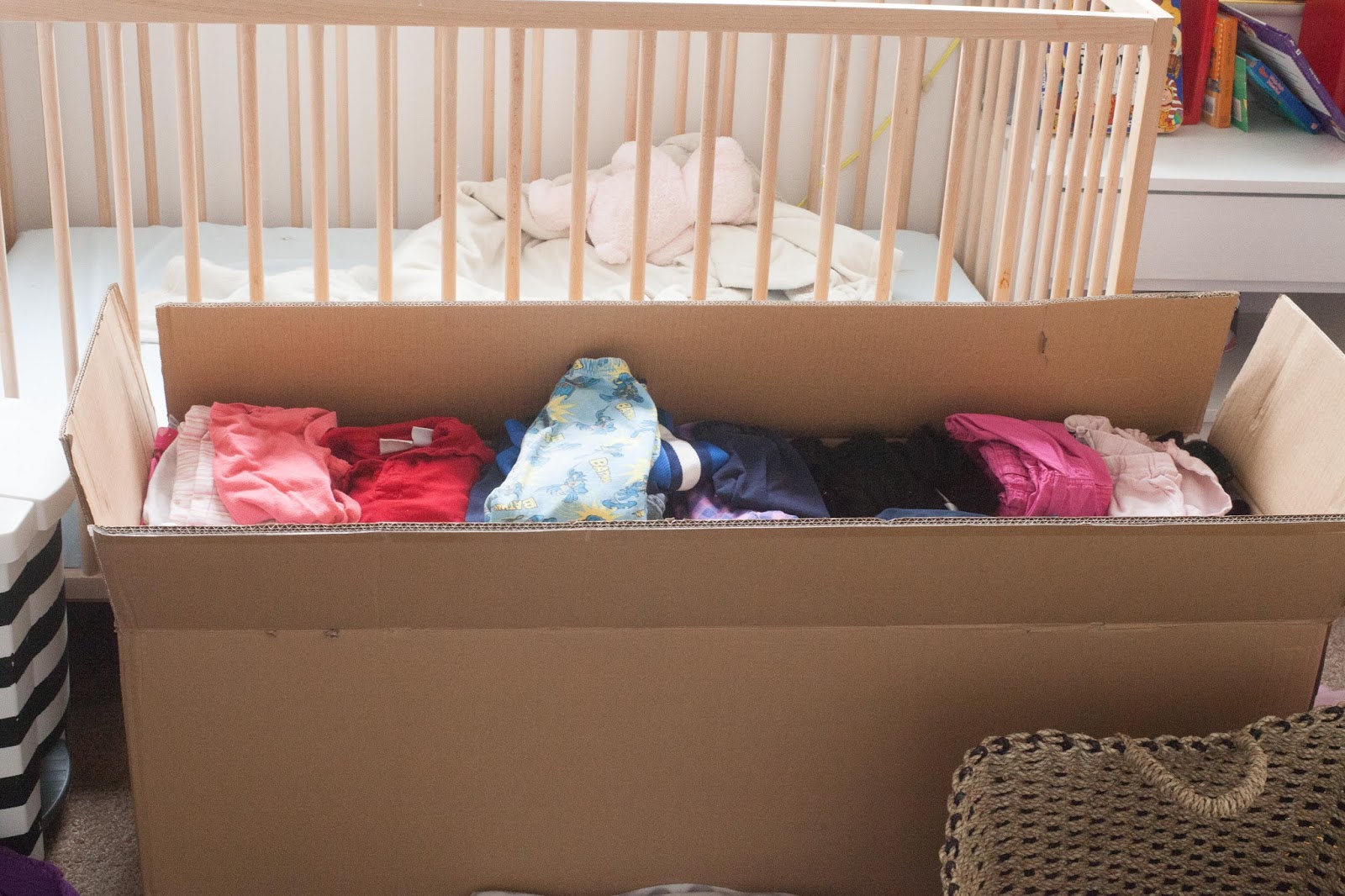 To sum up: You guys. It's been SO awesome. Save for one tiny emergency (walking out the door and someone peed his last pair of pants...so into the box we dove for a clean pair), we haven't missed the clothes at all. We haven't felt a serious "lack" of clothing. We still get behind on laundry sometimes...but we feel the pressure to catch up sooner, and getting "caught up" is just a few loads away...not, like, EIGHTY FIVE. Also, I actually ended up doing this with my own clothes, about a week and a half in to the experiment with my kids' clothes.

I have learned a lot. And since each thing I learned is kind of its own little thought, kind of like a mental bulleted list anyway...a bulleted list is what you get!

Here are my thoughts on the experiment:

-There was remarkably less mess on the kids' bedroom floor! Maybe I was better about reminding them to put their clothes in the laundry when they changed, or maybe there was just less to get strewn about...or both...but their floors stayed so much cleaner. Awesome!

-Less "costume changes." I'm thinking of my oldest, in particular. When met with many, many dresses to choose from, she goes into dress hyper-drive and changes FOUR times a day. I'm not kidding. With less to choose from, she often took more time deciding what to wear in the morning...and then almost always stuck with it until the bitter end of the day. That was surprising, though it makes sense in hindsight.

-Laundry is no longer an overwhelming chore. I do not do well with one big "Laundry Day" where I commit to doing all of the laundry that has piled up over a week, or several days. Laundry feels so bossy in that situation! (Taking up my whole day?...Rude! Ha). In my previous post, I mentioned that doing one load of laundry every day is usually just enough to stay on top of our laundry in this family. BUT!...knowing that and doing that aren't always the same thing...and when we would get behind, for whatever reason, we were staring down this HUGE backlog-of-a-chore in order to get caught up. And truthfully? Because there were many, many "second-string clothes" (the clothes you only wear when the ones you actually like are dirty)...there was far too much potential to keep procrastinating (which, of course, only made it worse). With less, we ran out of clothes more quickly...which, really, was a blessing in disguise. If I slacked on laundry once-a-day, then we NOTICED by day two...and were hurtin' for clothing by day three.  I would do a couple extra loads to get back on track, and ta-daa! Caught up. So much better.

-I learned which clothes really work for my kids, as in which styles/patterns/fabrics. I learned that my littlest baby does best with darker patterned tops that hide avocado and berry stains, and one-piece outfits were awesome for keeping track of a whole outfit (less pieces to gather!). I also learned she needed more onesie-undershirts than I had thought...she went through them fast! I finally faced the fact that my oldest daughter loves dresses, period. I intentionally kept out two pairs of jeans to see if she would choose them with less choices...and she didn't wear either of them once. She would be perfectly happy with a wardrobe of only dresses and leggings. I learned that I need to buy my boy shirts in colours and patterns that better hide snot and mouth-wipes and dirt. Yeesh. Someone teach that boy to use a tissue. And napkin. And soap. Who's his mother, anyway?
-Knowing what clothing works best for them is important information especially since this
experiment will affect permanent change. They'll be living with fewer clothes from here on
out...and now I'll be better able to make more intentional choices; I'll know which pieces are worth
investing in for each of them, what to hold onto from hand-me-downs...exactly which pieces will
earn the space it takes up in the closet or drawer.

-And then there's that mysterious, spiritual thing that happens when you live with less. Know what I'm talking about??? Just...the less clutter, less stress, greater appreciation and gratitude for what we have...no desire to add more...in fact, I kind of panicked when faced with the idea of picking up more clothes at a garage sale about half-way through this. The clothes were SO cute! And cheap! BUT...when push came to shove, I just had zero desire to mess with The Zen of Minimal Clothing we had going on. Ha! Seriously, though.
-The kids did wear out clothes a little more quickly. There were a two shirts that got worn and abused so badly that they were toast. But with that also came the satisfaction of knowing they had been well-used, loved, stretched to the maximum...stains had been removed (and replaced with new ones...ha.) and repairs made until it was time for it to retire. RIP bunny t-shirt. You were adored.

-On that note, when something wore out, I knew exactly WHAT needed to be replaced...and that it actually NEEDED to be replaced; it was one of five shirts! That was refreshing to not have to think about it and weigh out whether they actually needed it or not. They just did, because they were already living on simply what they needed.

-I did the experiment right in the middle of a seasonal change, which mean that the thick, Winter PJ's I had kept out didn't work as well when the weather warmed up. Oops.

-I like change; and I often have to immerse myself in a situation in a temporary way (like this extreme experiment) to experience what it would feel like to live that way. But I think if I was one who didn't like things changing so fast, so drastically, I would try just taking one or two things out of my closet every few days. I wouldn't have to give it away right away (if it helped me feel better about pulling it out)...then if I found I didn't miss it, I'd give it to someone who would love and appreciate it better than I could.

-I often thought about how weird this experiment would look to someone who had so, so little. Here's me, thinking that three pairs of jammies for each kid was barely enough....when imaginary-person-in-my-head didn't even have one pair to their name. It made me feel guilty, humbled, and grateful at the same time. The guilt isn't productive, so I tried to focus instead on how our family will work on continuing to be grateful for what we have; it's wonderful to live in a country where we have plenty!...but also finding the balance of what amount of stuff "works" for our family, for right here and right now, in a way that is not excessive... but also does not create undue stress. And also, to always strive to bless the lives of those around us in any way we can...even with our extra pairs of hand-me-down PJ's :)

Where to from here:
Living with less in this area of our lives felt SO good, so much better than having to spend the (wasted!) time managing the excess. The amount of clothing the kids have now is just about perfect for this season of our lives, so I think we'll stick to it. I plan to pick two things for each child out of "The Box," (most likely something that I now know they will use...or that will replace something they've worn out in the past month) and then to donate the rest to a charitable organization. I plan to be more intentional with incoming hand-me-downs and killer sales. And I plan to let this permeate other areas of STUFF in our lives (Basement: I'm coming for you.)

What do you think? Do you think you would try something similar? Do you even need to?...or are you pretty good at keeping your closet to the basics/necessities? (if you are, share your secrets!)
Labels: Family Parenting Simplifying The Laundry Experiment