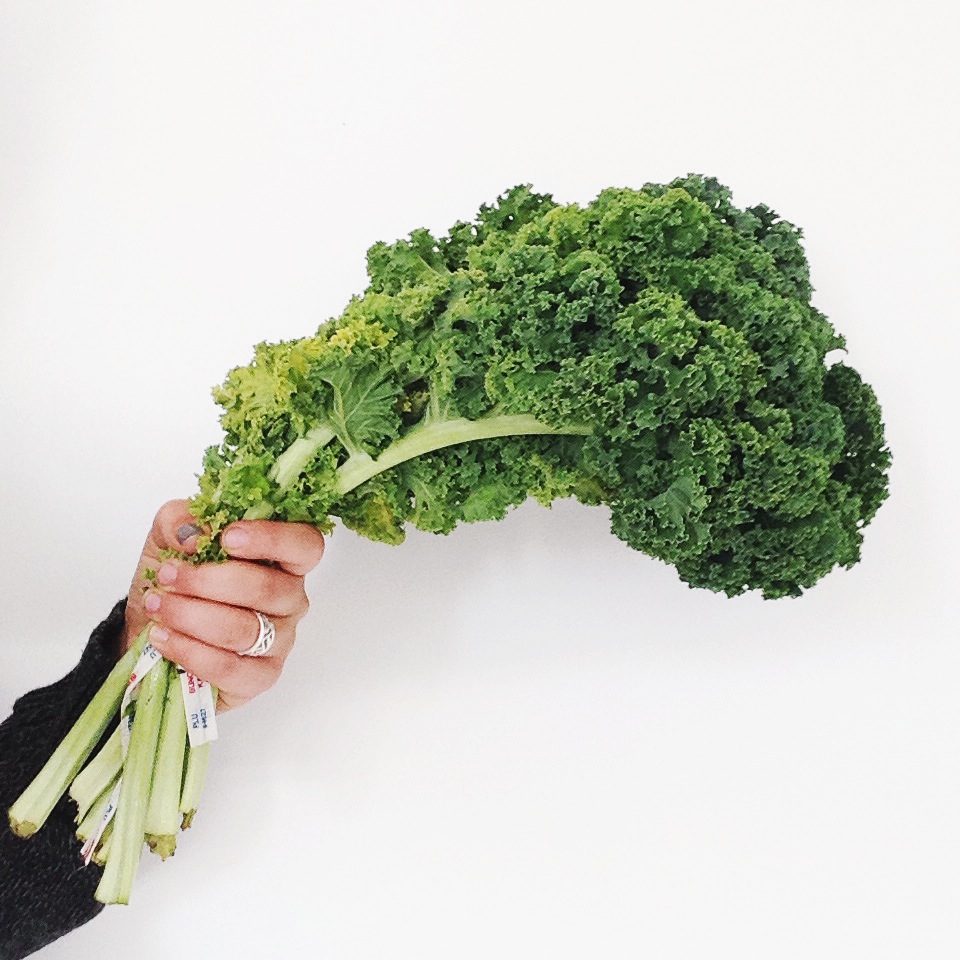 This past Saturday I hit the half-way mark for the Whole30. I remember when I did this last year thinking, "I made it this far! If I've already done it for two weeks, I can do it for two more!" And I did and I survived. Phewf.


SO...in honor of reaching the half-way point this time around, I thought I'd share how things are going so far. Here are my random thoughts, in bulleted list form: 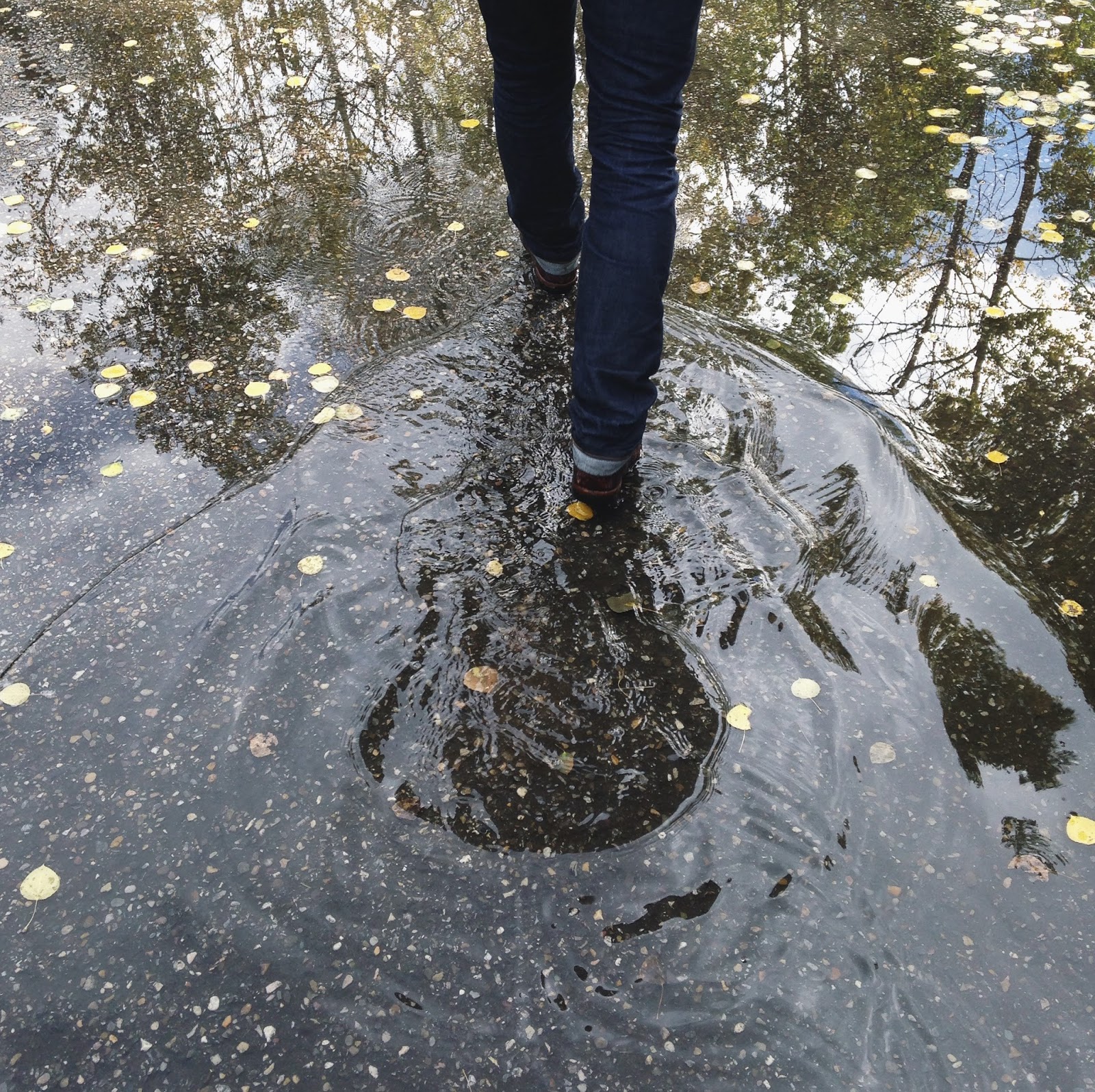 -My favourite benefit of the Whole30, by far, is that I have a steady supply of energy throughout the day. I still get days where I'm tired, but I can directly trace it back to a rough night with the kids, or a late bedtime/early morning...as opposed to this overarching fog of fatigue that I don't understand. I mean, really? Motherhood is exhausting in general; but it is manageable these days...and easy to forget about, even. Ssh! I might have just jinxed myself.

-My skin looks a LOT better, I don't feel bloated all the time, and my clothes are getting a little looser. You're not allowed to take body measurements the whole time (weight or inches), because it's supposed to be about more than looking good and losing weight...although eating good, whole, healthy food usually has that effect anyways...right?? Ha! Anyways, I'm feeling lots of positive physical effects either way!

-I don't get hungry in between meals. Officially, the way your meal is supposed to be structured is with protein, lots of veggies, and a healthy fat...and occasionally some fruit. After that initial week of fighting the need to snack out of habit, rather than out of actual hunger, I am finding that I no longer feel "snacky" between meals. If I am feeling genuinely hungry, I grab a piece of fruit or a few nuts and that ties (tides?) me over until my next meal. HOWEVER, I remember last time I did the Whole30, I was breastfeeding a 5 month old baby. I found that I had to have four square meals a day, and had to make sure I had some higher-carb veggies in there (squashes, sweet potato, etc.) or else I would wake up to feed my baby in the middle of the night all shaky and weak. This time, three meals and the occasional snack has been just fine, no weird withdrawals or side-effects.(...I'm also no longer breastfeeding.)

-Interesting fact: last year when I did the Whole30 while breastfeeding (exclusively) my 5-month-old, she had a bowel movement almost at exactly the same time, every single day. I thought that was funny/weird/fascinating.

-I sleep SOOO much better. I suspect this actually has more to do with when I'm eating rather than what I'm eating (although I'm sure it doesn't hurt! Ha.). I experience better sleep in general if I make sure to not eat after supper. If I get feeling "munchy" then I sip on a giant glass of lemon water (and have to pee, like, fifty times during the evening) or herbal tea with lemon in it. I sleep like a rock when I do that! Whole30 or not! The times when I've happened to eat a little something late in the evening, I can totally tell the difference in my quality of sleep.

-Last time, I just did what I could to stay on track...I ate foods I liked, and tried a few new things, but mostly just ate things I knew were compliant without a thought for getting creative or fancy. This time around I knew what to expect, and was starting from better eating habits anyways (thanks to the first Whole30)...so it's been fun to get more creative with my meals and enjoy trying new things. I like playing around in the kitchen...so it's been fun for me!

-White potatoes weren't allowed the last time I did the Whole30...but they are now! As of, like, a month ago. I didn't think it would really make a difference to me as I'm not really a potato-person (*funny mental image of person made of potatoes*)...but it's actually been kind of fun to have the option of throwing a few little potatoes in with the veggies I'm roasting.

Want to know which have been my favourite new recipes that I've tried so far? 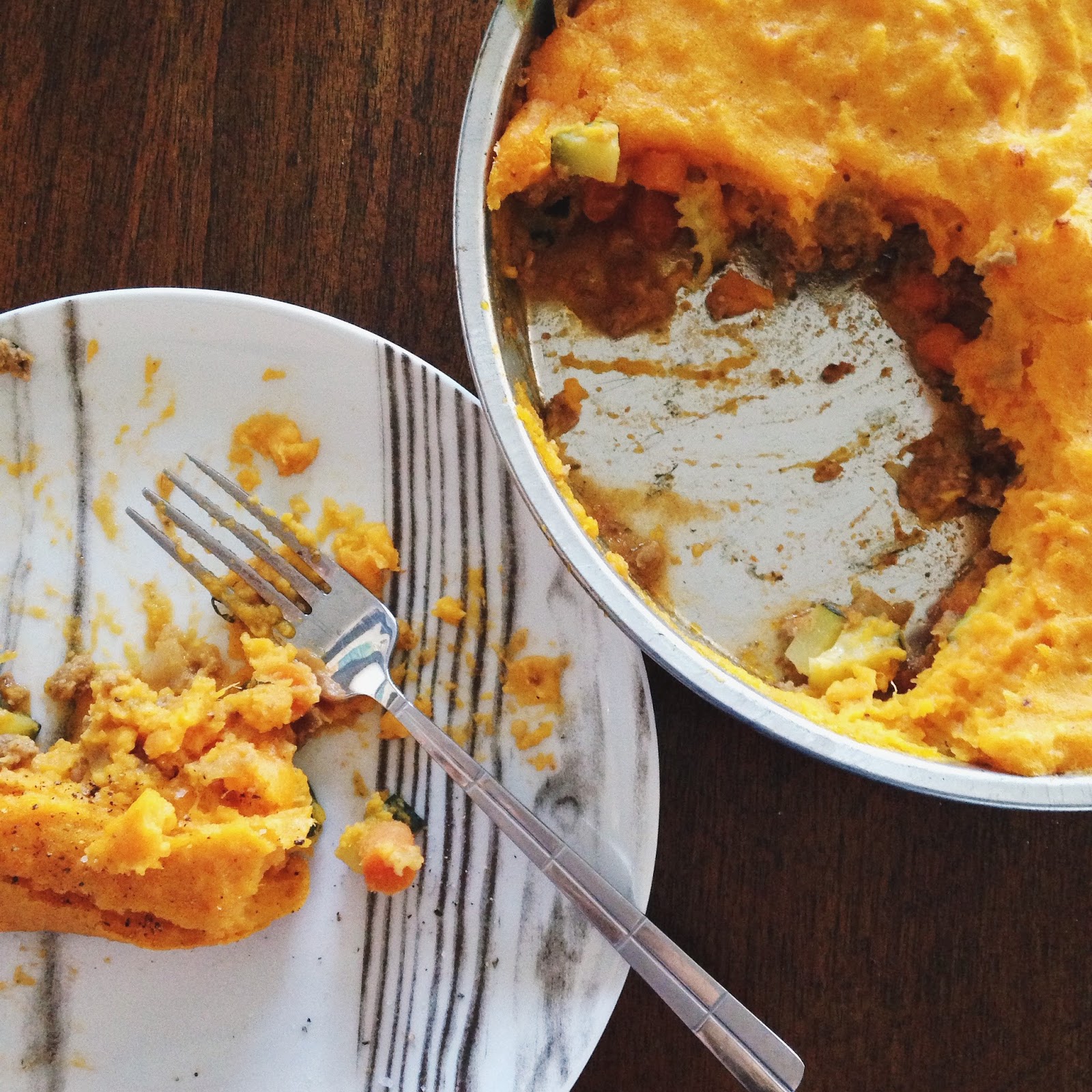 This recipe for shepherd's pie...with sweet potatoes on top instead of white ones. You could totally do the traditional white potato topping now, but I loooove sweet potatoes, and found it gave this amazing sweet/savoury combo that I just about fainted over. This one will definitely be in rotation even when Whole30 is done and over with. 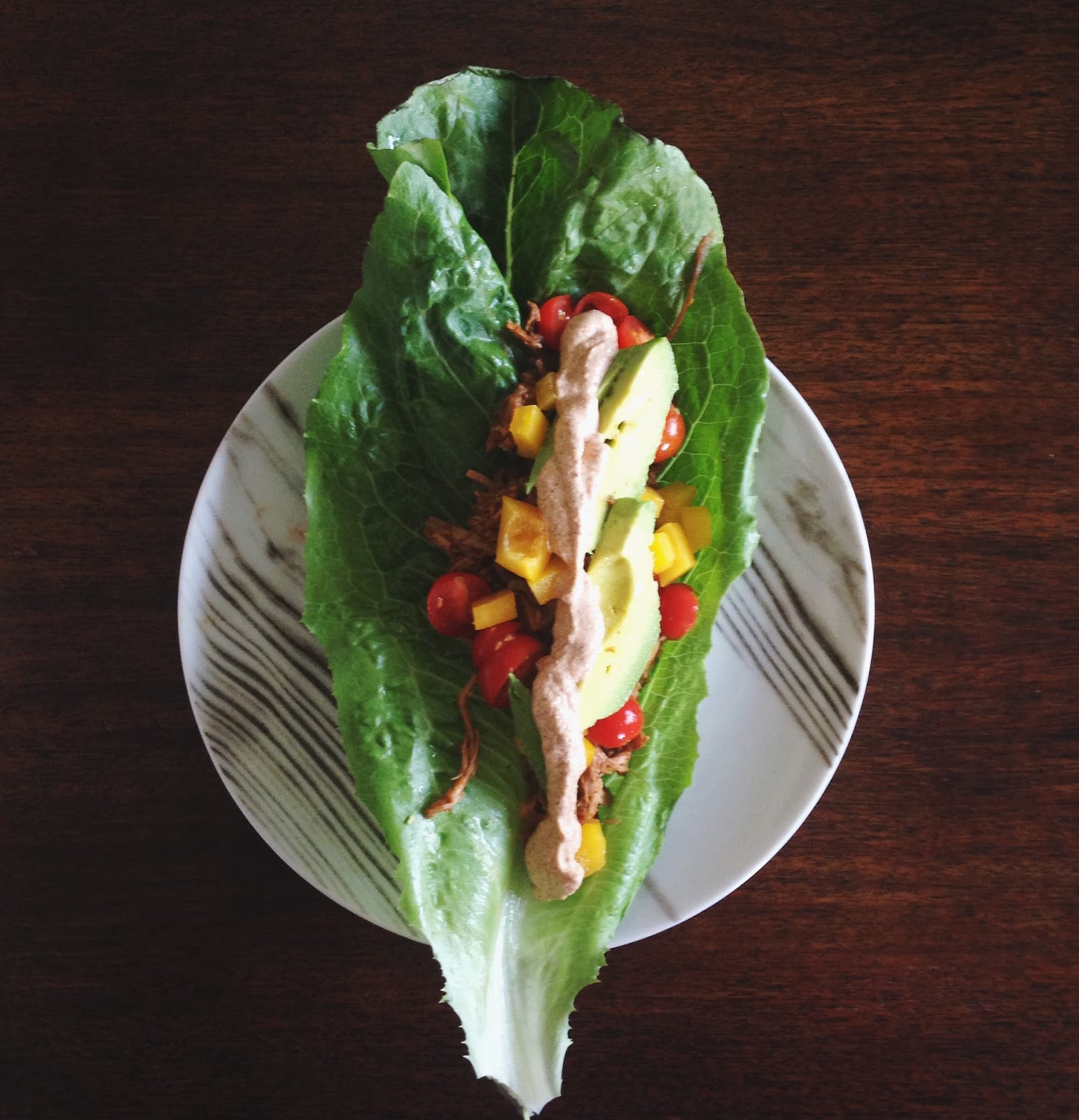 This recipe for pulled pork is pretty dang delicious...and makes a nice, easy crockpot meal. It comes out tasting really taco-like (not "barbeque-like" which is what I usually think of when I think of pulled pork sandwiches), so I used it as taco meat and threw it in a lettuce leaf with tomatoes, peppers, avocados, and a spicy cashew sauce...and it made me not miss regular tacos one bit. Also...I used the same seasonings with 4-5 chicken breasts in the crockpot at 6hours on low, and it made great shredded chicken for tacos, too.

(Also, if you shred any meat...promise me you'll use this technique. You will never have to sit there with two forks ever again. It works, and it works fast.) 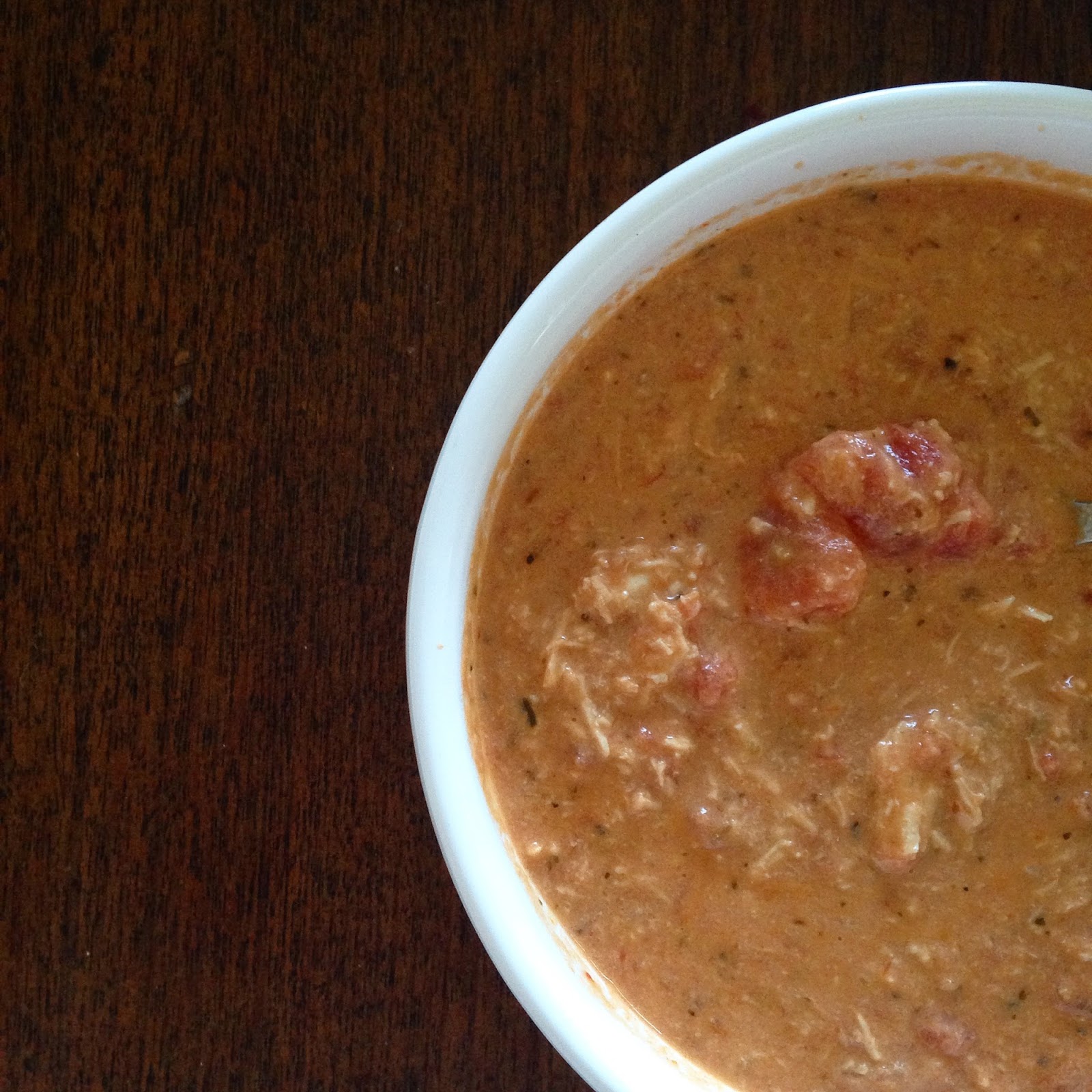 This one looks unimpressive, but it was tasty! At first the idea of a creamy tomato-ey soup made with coconut milk weirded me out, but it got good reviews in the comments...and I was itching for a good comfort food that was compliant on these increasingly cool fall days. It was just what the doctor ordered. The tomato/coconut milk combo worked, and it made a soup that was creamy and satisfying and just YUM. If you have dairy-free folks who need a good replacement for creamy, comforting soups, send them this recipe for Creamy Crockpot Chicken and Tomato Soup.  Also, its always nice to have a meal that cooks itself on the Whole30...there can be lots of time spent in the kitchen throughout those 30 days!


So there you have it. Here's to the next two weeks! If you want to keep up with me day-to-day, you can follow me on Instagram (@essaieblog).

Any good Whole30 approved recipes to share? Have you done the Whole30? What benefits did you experience? Were they similar to mine?