It's only the first day of December and I'm *almost* done my Christmas shopping.
WHAAAT.
I feel awesome about that because I'm often a last-minute, crunch-time shopper...something about the pressure is kind of addicting. BUT, NO MORE! I was organized and "list-y" and determined this year, and the result is a December ahead that feels full of fun and joy...not stress and overwhelming "to-do" lists. You naturally organized people are rolling your eyes at me, I just know it. Humor me and pat me on the back anyway, mmkay? O-kay. 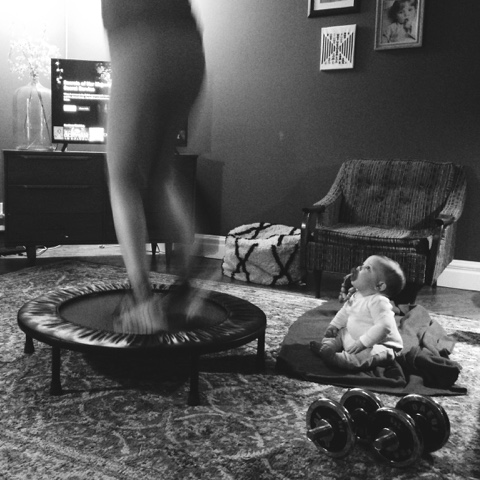 However, I'm pretty sure you're not here to listen to me blab about my Christmas shopping. So allow me to blab, instead, about how my November goal went: the goal I set to exercise five days a week for 20 mins.

It went reasonably well; read on!

I was planning on exercising in the morning when I continued waking up early (from my October goal). HOWEVER, it was everyone-is-sick-all-the-time month in our family so getting up early was pretty tough to do. Every minute felt precious after fighting a wicked head cold and getting up with coughing kids. SOo...it usually ended up happening in the evenings. But it still happened! Usually! I consider it a success.

There were a couple days I totally forgot (out and about in the evenings...or whatever). And a few days where defining my workout as "working out" was really stretching it. So I averaged four days a week, when all is said and done. I aimed for the moon and landed among the stars...!? Insert your own pep-talk for a job not-too-badly done here.


Here are my thoughts/lessons learned this month:

-I actually really enjoy exercising, but have a hard time doing it at home. I knew this before, but now I extra-know it. Truth: confirmed. My intent was to simply establish a habit, but I think the next exercise goal I set will include a structured program or plan to help with my "easily sidetracked while working out at home" issue. Does anyone have any favourite home workout plans they want to share!?

-Like I said, I was planning on just establishing the habit this month...and I do feel like I was successful in that regard! Now I know that after the kids are settled in bed, I can pull out the trampoline/invisible jump rope/dance music/etc. and just get going for just a few minutes before I get too carried away in my evening stuff. No biggie. I usually don't even change into legitimate exercise clothes/shoes.

-When I started at the beginning of the month, I half-jokingly would jump on the mini-trampoline we have, mostly to make myself laugh at how ridiculous I must look. Welp, it's exercise! I would snicker to myself, And there's no way I'm running outside in the ice and snow! BUT...jumping actually turned into a real thing! I was tired/bored after 5 mins when I first started, but now I jump for a full 20 minutes before doing floor exercises and I feel great. Moral of the story: doing ANYTHING is better than doing nothing. Also, jumping is apparently really good for your lymphatic system: bonus!

-Now that I'm in the groove, I am really tempted to do another exercise goal for December, too! However, other goals are calling my name so we'll have to see. It's taken the whole month to feel like I've got something established, though...so the lesson here is the age-old truth that creating a habit TAKES TIME. Self: you need to stick with something long enough to find your rhythm.

-I am really struggling with being a good and patient parent to my five-year-old son right now (ARRRRRGH!!!) and exercise has been such a good stress-reliever! On a completely unrelated topic, does anyone know a great hair dye that covers grey really well?? Geeez.


Tomorrow I'll post on my goal for December.
(Sssshhh, don't tell anyone... but I'm still undecided! I have two areas that I really want to focus on, so it'll be a tough call.)
Labels: Health My Healthiest Year Yet 2015-16